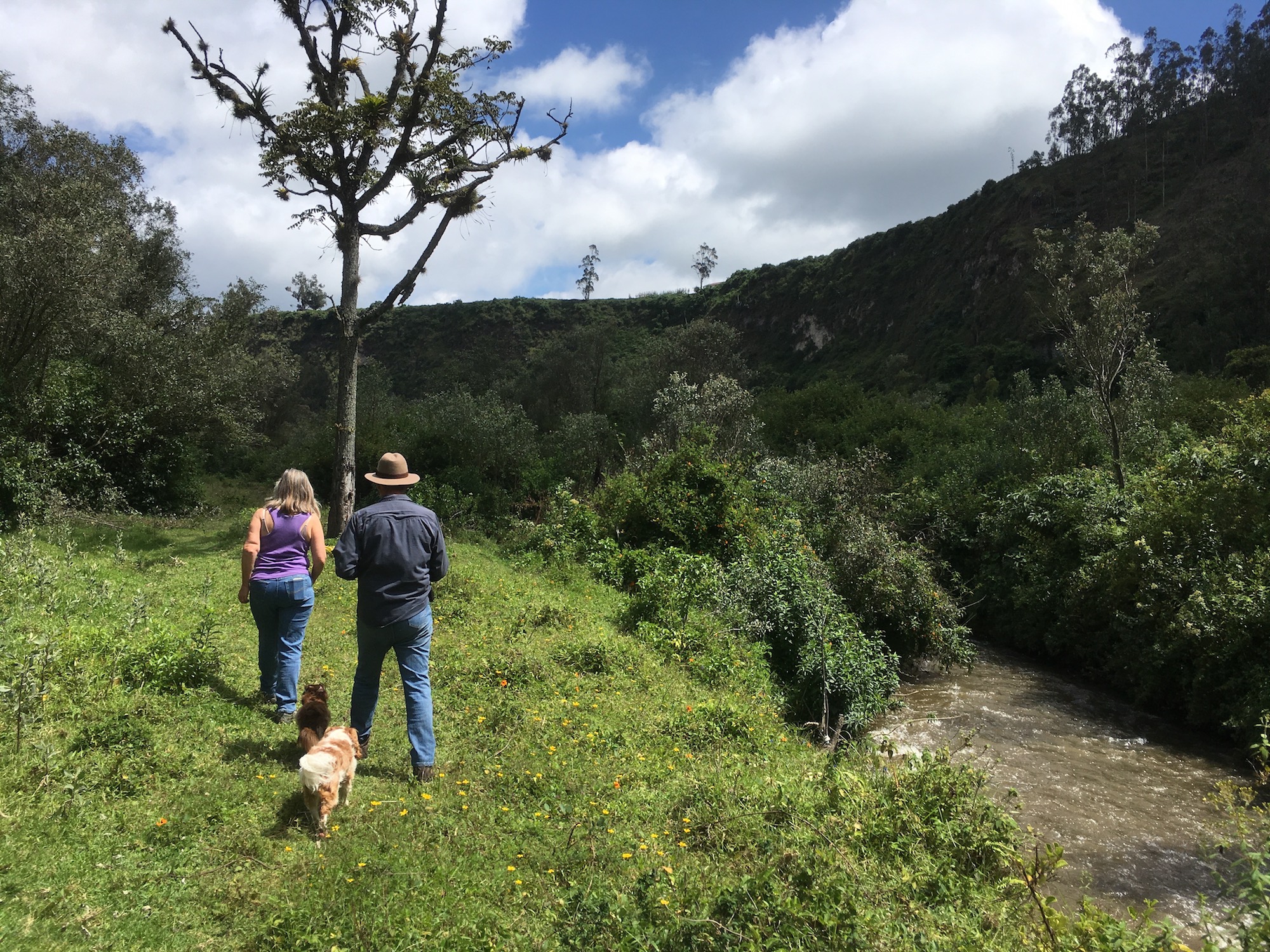 In the US, one of my favorite pastimes is to hike with my dogs.  Whenever and wherever possible, that’s what we like to do as a family.  Here in Cotacachi, that hasn’t happened yet. Outside the town, the landscape isn’t filled with parks and trails as we have in the US.  I understand other Ecuadorian towns have a better park and trail system. 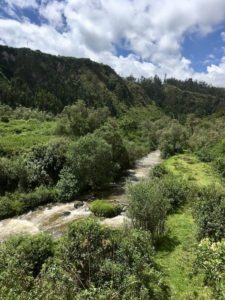 We made new Australian-Ecuadorian friends, Ray and Jill.  Recently Ray took us hiking with his two dogs and his neighbor’s two dogs.  The neighbor’s dogs used to be street dogs (“callejeros”) until he adopted them.  Now they are happy to be domesticated and part of a pack.  Since we miss our dogs so much, this dog-hike was welcome.

We walked across our small town to meet up with Ray and see where he lives. He and Jill live in a typical expat community:  three quite beautiful houses close together, with an adobe wall around them. The residents of these walled communities develop bonds, like a small village.  Given the poverty of locals, much effort goes into preventing burglaries, with things such as walls. Walled communities plus bars on doors, windows, and businesses are a part of life. The bars are made as beautifully as possible since they’re necessary. The result is a real art form: ornate cast iron bar decor for windows, doors, and tops-of-walls. 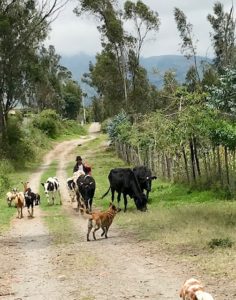 Jill stayed home while the rest of us prepared for an arduous, long, steep hike. We three humans and four dogs walked a mile or so away from town, through a sparsely populated landscape, down a dirt road lined with eucalyptus trees. Ancient stone walls mostly eroded away, stood in partial segments. Rolling hills to our left showed occasional farms and groves of trees, patchworks of variegated greens blurring into the far distance.  Beyond all that were mountains and volcanoes.  We rounded a corner in the path and gasped at the sight of the land plunging down into the deepest, widest, greenest canyon I’ve seen since Colorado.

A gringo bird enthusiast with a huge camera was the only other person on the trail that day. Birds twittered as we descended, horses in a meadow whinnied as we reached the canyon floor. The winding trail from top to floor of the canyon was probably over half a mile long. As we hit the canyon floor, we saw an old water well spouting iron-rich water onto a beautiful rock, where it splashed to the ground. When the iron water surged out, the flow of water turned red. When the iron surge ended, the water turned clear again.  Interesting! 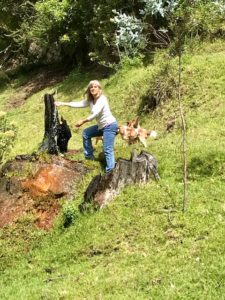 Our group hiked next to a stream, admiring the variety of flowers. An abandoned handmade-brick waterway featured greenery and flowers sprouting from the cracks between bricks, thus growing in little rectangular arrangements. Nearby was a ruin of an ancient building, in the process of being taken over by plants.  That ruin had the look of being made centuries ago.  On our way in, we had seen similarly aged rock wall formations.  Walls with handmade bricks or handmade mortar and local stones were weather-worn, eroded down to ruined segments of what they once were. History comes alive in a place like this, where you can see vestiges of past cultures everywhere.

The trail led us way up and way down, so the views changed perspective constantly.  It was as peaceful a spot as any on earth. Outside sounds were dampened by the height of the canyon walls. We speculated about indigenous communities living here in past centuries.  Sure enough, on our way up and out,  we passed an extremely worn-down segment of an ancient stairway carved into the stone of the canyon wall. Walking on that worn stone myself, I could easily imagine other feet walking the same steps centuries ago.

The dogs celebrated our ascent back up the canyon by racing and tumbling, wrestling and growling, stalking and leaping like a herd of ecstatic wild beasts. We humans, however, needed a couple of brief rest stops.  Well, I did, anyway. The altitude got to me after two hours of hiking such steep terrain. 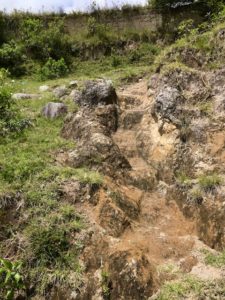 As we retraced our walk back down the dirt road, we encountered a traffic jam. An indigenous man was shepherding about a dozen cows and goats, which filled the roadway. Our dogs made some noise but were otherwise pretty well-behaved.

Gary and I walked back into town after the hike, taking our time to explore. We wandered into the walled community where the birding photographer said he lived. Those houses were artistic, extensively gardened with flowers, decorated with tile mosaic designs. Thick old avocado trees at the edge of the enclave sheltered a grazing horse. The unfamiliar concept of a walled community began to make sense, the more we saw of it. It felt good to expand our explorations beyond town and into such gorgeous wilderness, with new friends.