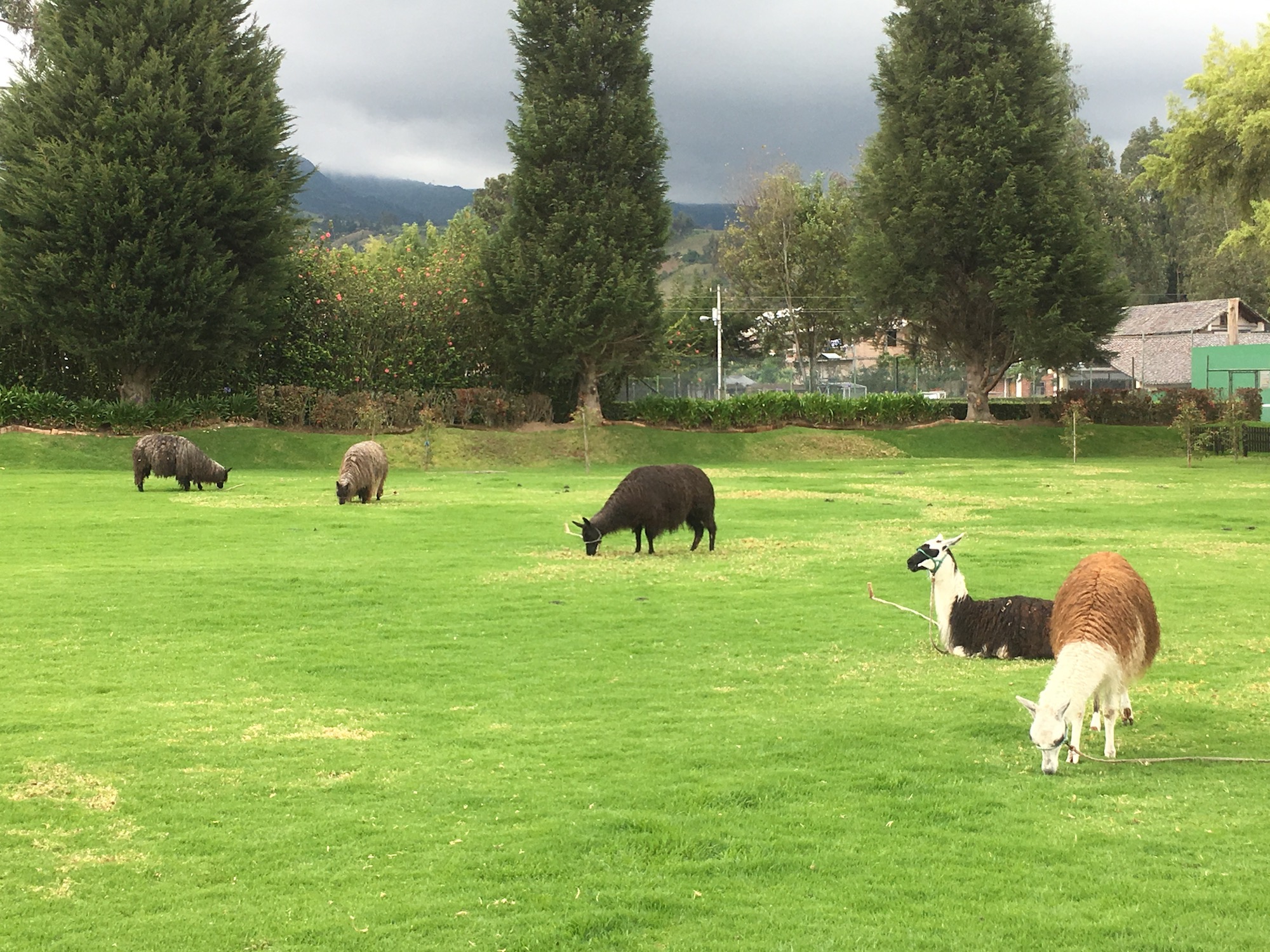 On our last weekend in Ecuador, a “taxista”  drove us to the far side of Otavalo, to Lago San Pablo, a lake at the foot of the volcano Imbabura.

The original plan had been to take a bus. Gary and I and our friend were waiting with a dozen other people at the bus stop when a taxi driver pulled up.  He shouted out that he’d take anyone to Otavalo for 50 cents each.  We jumped in, and so did a teenage girl from the bus stop.  He explained that he lives in Otavalo and had to go home anyway, so he offered discount rides to us. 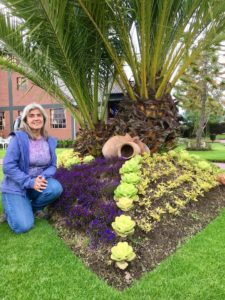 The three of us gringos went to a lovely resort on the edge of the lake.  The resort is called Puerto Lago (Lake Port). Clearly, this was one of the places where more wealthy Ecuadorians go to vacation and play. It’s a meticulously landscaped grounds, with varied flower gardens around the edges of the high-end modern cottages.  All the cottages were rental rooms, and they all faced the lake at the foot of the volcano.  Every room appeared to have a view of the volcano with its green sloped sides and cloud-decorated top.  That afternoon, a group of adorable well-dressed adolescent boys and girls were playing on the giant swing and the rental paddleboats.  I was amused to hear them shrieking and pretending to need help and tossing things at one another and hurling mild insults from one boat to the other. Teenagers are the same all over the world! The giant swing sits at the very edge of the lake. The ropes are so long that you find yourself swinging out over the lake. Kids pushed one another on the swing, laughing and shouting.

Behind the cottages is a meadow with six llamas staked out to graze.  Each llama had munched a circle in the grass around its stake. Other circles around the meadow showed that they were moved around daily. The caretaker told me the llamas loved to go for runs on their leashes, running all around the meadows and along the lakeshore. His voice was full of affection as he talked about his llama friends.  (for those who are curious, yes they DO pronounce it “Yama” in Spanish.)

The four-star quality restaurant beckoned us when lunchtime rolled around.  We had a scrumptious, artistically-presented gourmet lunch by the window with a view of the lake and volcano. The boneless trout was fabulous, but the mushroom soup was world class.  After sharing a chocolate mousse dessert, I left Gary and our friend to talk politics and investments.

I lay on a chaise lounge on the lawn and gazed over the lake.  Imbabura volcano rose from the edge of the lake up into 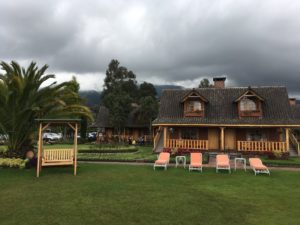 the clouds, right before me.  I half-dozed, half-meditated, and felt myself blend into the timeless presence of the area.  These are living but inactive volcanoes, still exhaling gently from the ancient depths of the earth. The quiet, still lake felt like a part of the volcano, living and breathing from deep within the earth.

It was nice to live for a day beyond the perimeters of the small impoverished town where we’ve spent most of our time.  That poverty is not true everywhere in Ecuador. There are pockets of wealth and pockets of poverty and everything in between. It was good to experience that. This is a country of multiple cultures and multiple lifestyles.  The Quichua people are descendants of Incas.  The mestizos are descendants of the Spanish conquistadors. They live side by side, together creating a tapestry that now includes communities of expatriates from other countries. It’s been odd to visit as such an obvious outsider in this country.  The good part is that we have felt very much welcomed wherever we have gone. Although we look and dress and speak differently, the presence of non-Ecuadorian vacationers greatly helps their economy.  I’m glad to be part of that.