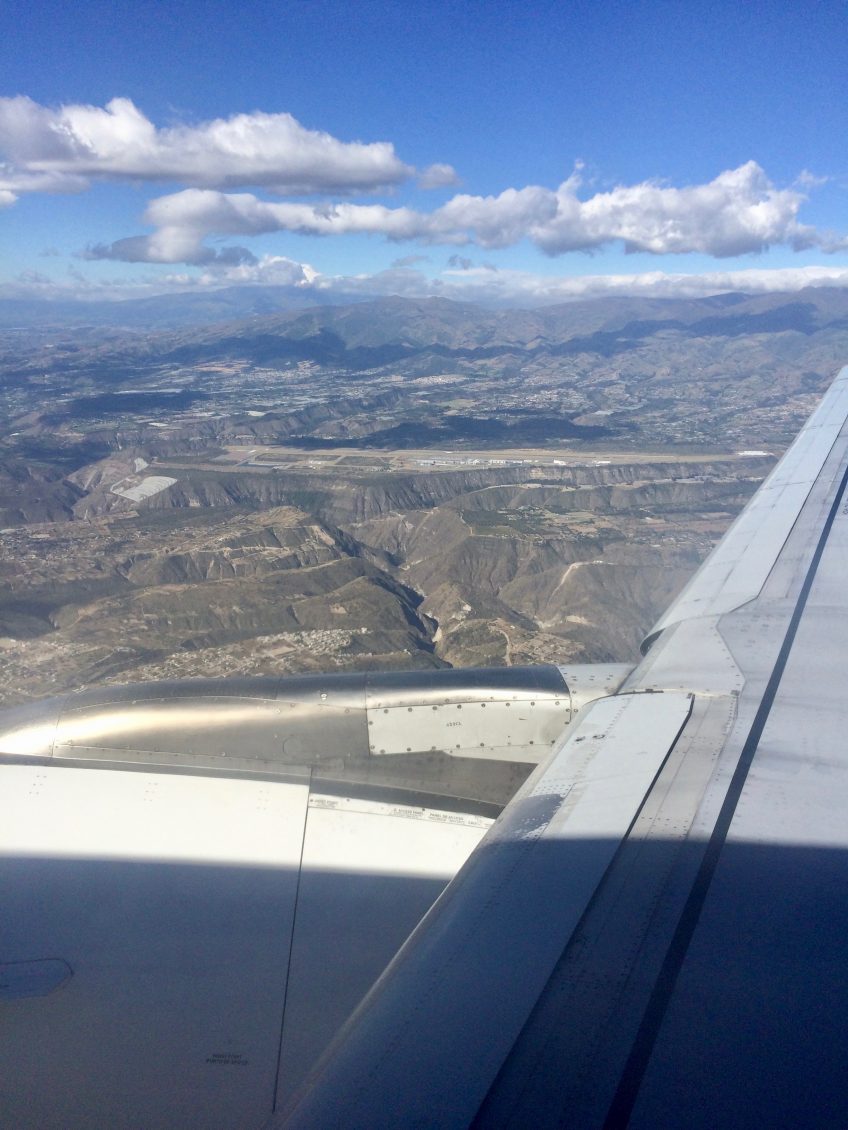 The moment we’d been aiming towards for a year finally arrived. Clusters of city lights emerged from the darkness as our plane sank lower, skimming over the nighttime Andes mountains towards our new home in Ecuador.  Our airline changed our flight from a daytime one to a much later flight. We had to accept a midnight arrival. As the plane touched down, I could hear Star, our Australian Shepherd dog, begin howling in the baggage compartment, right beneath our feet. Our cat Maya was surely huddling wide-eyed in her kennel next to Star’s, letting the howling speak for her.

When we filed in the Customs area, I had to switch my brain from English to Spanish.  The Customs agents were swift. They briefly reviewed our Temporary Residency Visas and cheerfully welcomed us to Quito.

Within minutes, the animals’ kennels rolled out on the conveyor belt. Had we sent them via cargo, there would have been a wait of many hours, while all the cargo was checked in by the Agriculture department. We were so thankful for our facilitator, who advised shipping them as baggage. According to her, American Airlines has the best record for taking animals safely as baggage.

Cristian (our facilitator’s assistant and our driver) met us shortly after we stepped out of the Customs area. The first order of business was to take Star and Maya outside for some relief from their kennels. They were so well behaved! We expected some misbehavior after their ordeal, but there was none.  Maya, in her harness, explored the bushes. Star bounded around licking everyone in sight.

We stuffed our 4 duffels, 2 backpacks, 2 carry-ons, and 2 kennels into the driver’s truck. He drove an hour to the historic Hotel Vieja Cuba in metropolitan Quito. Bleary-eyed, we met the equally bleary-eyed hotel staff at 3 am. We carried everything up three flights of carved wood stairs to our room.

The next two days were spent beginning the process of obtaining our national ID cards, called cédulas.  Good thing we had an expert driver who knew the city and knew the routine for applying for cédulas. Lots of driving and lots of walking were required.

It was our first exposure to some unexpected Ecuadorian methods of doing business. We went to one agency and stood in a long line. When we got to the window, they began the paperwork, then told us to go pay a fee of $5 each at their bank. Cristian led us to their bank a few blocks away.  We stood in line there (noticing many of the same people who were in the first agency) and eventually paid our $10 into the agency’s account.  With the receipt of deposit in hand, we returned to the agency and stood in line again to prove that we’d paid. Then they issued the first set of papers indicating that we were immigrating (temporarily).  This whole process was repeated a few times at different offices, to get varying levels of proof that we had visas and qualified for a cédula.

This whole process plus the altitude plus the exhaustion from travel wore Gary and myself down. When we were done, Cristian took us to a big lovely park to soothe our exhausted brains and bodies. It was a spacious expanse of woods and meadows, with an old adobe barn. Star raced along the paths. After a week in a car and hotels, then a day in a plane and more hotels, she was ecstatic to stretch her legs. We all lay in the grass, gazing at the deep blue sky filled with huge fluffy clouds. I chatted with a woman doing Kundalini yoga under a blossoming tree. Star trotted with a dog pal. I wondered if the dogs had any language barrier.

In our down time, we explored the city of Quito a bit. Between modern skyscrapers and city parks, there were little tiendas (stores) selling a specific product such as bread, or pastries, or batteries or toys. Gary and I ate most of our meals in the hotel, but had a couple excellent lunches at nearby cafes. We loved seeing some of Quito, the capitol city that we aren’t likely to visit often. Within a few blocks radius we found great food and met interesting locals.

On our last day, we we checked out of the Hotel Vieja Cuba, we bumped into a friend from our first visit. Fabiano was the charming and knowledgeable tour guide that you probably read about, in our previous story about our visit to the volcanic crater, Lake Cuicocha, near Cotacachi. He remembered us, and gave us his number to stay in touch. We will surely hire him for some future adventure tours.

Gary and I had the choice to take a short flight from Quito to our destination of Cuenca, or drive it. Driving meant navigating ten hours of sometimes winding roads through the Andes Mountains. We chose to have Cristian drive us, so we could see the countryside at close range. Thankfully, he’s a safe and careful driver. We’ve since learned that many are not… many drive way too fast and text while they do it.

Cristian loaded us into his SUV with the kennels strapped to the top. There was room for the dog and cat to move around a little bit between suitcases, and see out the windows.

What a good decision it was, to drive! Ecuador is filled with every kind of scenery imaginable. No cookie-cutter chain store malls were visible on this drive. Cristian was a good tour guide, letting us know what we were passing when it was of interest.  He even knew the names of the various volcanoes, and whether or not they were active. We shared a lot of interests with Cristian – an architectural engineer as well as part-time driver – so our lively discussions helped the hours pass quickly.

The scenery endlessly changed, kaleidoscopically. Cristian drove us past small farms with families tending their corn fields and farm animals.  Llamas wandered around the yards of shacks with tin roofs.  Cattle roamed loose as children played around them. Quechua women in colorful wool dresses led goats along the roadside. Always there were loose dogs guarding the animals and people.

Sprawling haciendas sat on immense rolling hills, surrounded by tidy symmetrical flower gardens. Their well-tended acreage showed the ripples, terracing and furrows of the mountainous terrain. Shadows of the ever-present “cloud forest” clouds slid across the fields of grass.

There was variation in the terrain, in the altitude, in the animals we passed, and in the wealth of the populace.  Towns displayed fascinating architecture of differing styles, built in different centuries. Tiny shops lined narrow streets in the cities and in the smaller pueblos. Pretty gardened neighborhoods showed typical Ecuadorian housing styles. Ice cream (“helado”) shops were everywhere that there was civilization.

In a high mountain pass, we were engulfed by the cloud forest! Cristian had to drive slowly through the thick mist. I peeked over the edge of a cliff as we drove, looked down and saw the tops of other mountains below me!  Looking down a mountaintop was a highly unusual experience. We parked at a restaurant on that mountaintop, to get some lunch with “chocolaté caliente”.  All three of us took photos of the valleys with villages far below, wreathed by clouds. Even more memorable than the scenery was the delicious hot chocolate. Ecuador is where chocolate comes from, and it is beyond heavenly.

Heading towards Cuenca, the towns evolved into small cities, with all the amenities. A sign advertised ancient Incan ruins to visit. Businesspeople in suits zoomed to and fro on the sidewalks, passing indigenous women in velvet skirts and panama hats selling fruits out of baskets. The typical Ecuadorian contrasts are always in view. These cities are anything but boring…. colorful, active, full of life.

Just as we entered the outskirts of Cuenca, the clouds opened to release a huge beam of golden sunlight that shone down onto the city and the University. It perfectly it the city streets that wound around and up and over the many hills. What a perfect welcome to our new home! With this first view, I already felt at home.