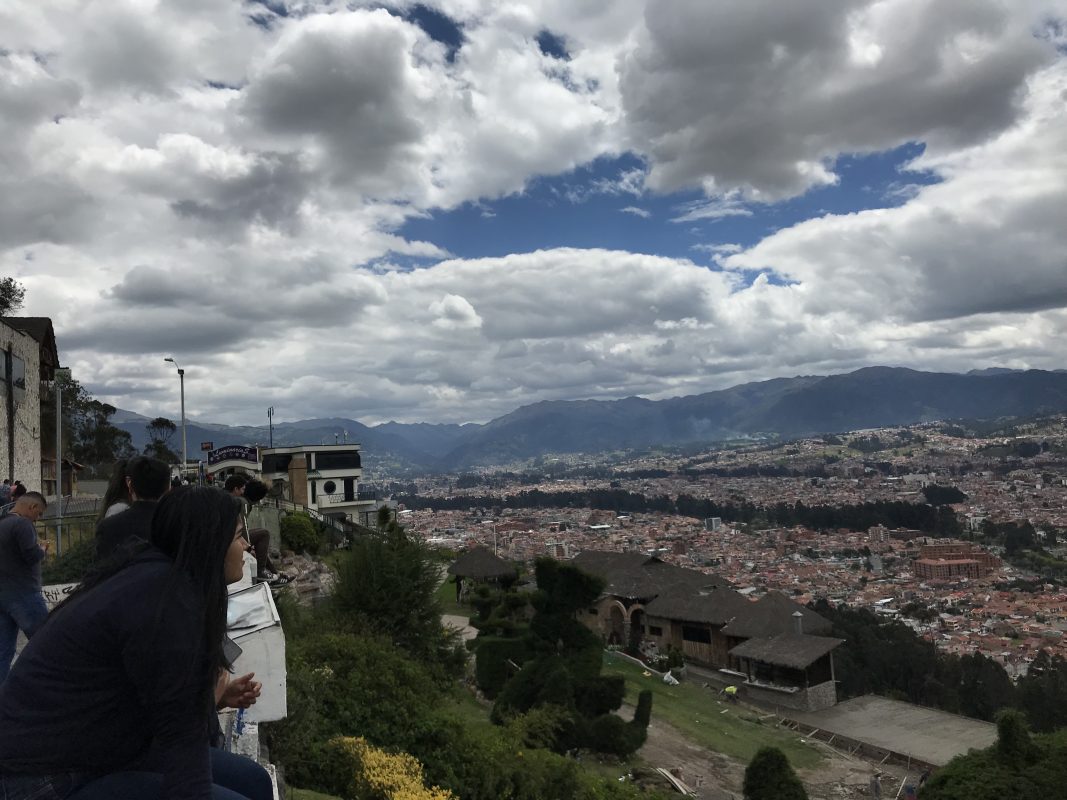 Recently we had two appointments downtown, with many hours of down time between. We decided to ride the double decker tour bus to turn the down time into an adventure.

First, I needed to locate a public rest room. The one we found was a great example of ways that Cuenca keeps people employed. A woman had the job of sitting at a desk outside the restrooms. She held the toilet paper hostage, until customers paid their 20 cents. For 20 cents you get a pre-cut and folded allotment of toilet paper. I guessed that the fees paid for its maintenance and for the salary of the attendant. Maintenance is necessary, because in Latin America, the plumbing is not able to handle toilet paper at all. Wastebaskets are provided for the paper. That feature took some getting used to, on our first trip here.

Our two hour bus tour cost $8 per person, and included a cup of a traditional Ecaudorian drink made up of guanabana fruit juice, sugar and other delicious ingredients. A dollop of rum was optional. As we waited for the previous group to disembark the bus, we enjoyed people- watching. The giggling uniformed school children being patiently herded down from the top deck clearly loved their field trip. Probably 8 years old, the boys and girls laughed together and pranced down the bus aisle in high spirits, stopping every 30 seconds to linger and admire some feature of the bus. One teacher smilingly tugged at their sweaters and backpacks to urge them to keep moving along. Their sense of fun got my own mood bubbling with joy.

The bottom level of this bus was wonderful! It was completely paneled in a warm golden wood, and was furnished with tables and chairs (all anchored down) carved of the same wood. The wood was so weathered it was probably many decades old, repurposed to fit the bus. Next to the driver was a panel of the same wood, with two inlaid white swans and some floral filigree. I tried to imagine someone carving those intricate wood designs and then inlaying them into the bigger panel.
The top deck of the bus just rows of ordinary seats, providing great views from way up high. 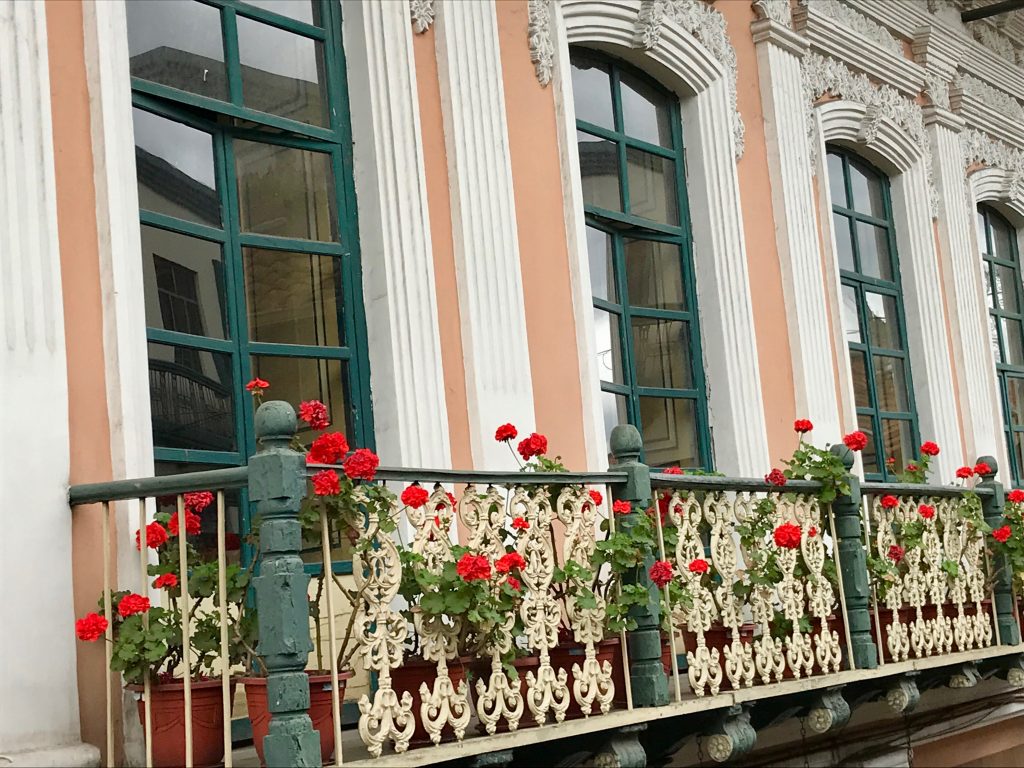 The tour started off in the very centermost square of downtown, called Parque Calderón. This park square is bordered on two sides by ornate cathedrals. One is called the Old Cathedral, and is several hundred years old. The so-called New Cathedral is a gargantuan carved stone structure that was finished in the middle 1800’s.

As the bus aimed into the oldest part of town, we had to sit down low in our seats, to avoid being beheaded by low-hanging electrical wires! The narrow streets offered us close-up views into the balconies and windows of the second floor of these elaborately ornamented ancient buildings. I was picturing women in long dresses and men with those tall straw hats standing on those very balconies two or three hundred years ago. We saw a bakery whose stone oven has been in continuous use for over 200 years. Some of the oldest sections of town were lived in by the Cañari people. They were the indigenous descendants of the Aztecs, whose numbers were greatly reduced when the Spanish Conquistadores took over.
It was like a tour through history. After the very old section of town, we went through more modern neighborhoods, with houses no more than one hundred years old. After that was a lovely city and University area, with skyscrapers and beautiful new-ish buildings. We passed parks with lovely geometric gardens with central sculptures of important historical figures. 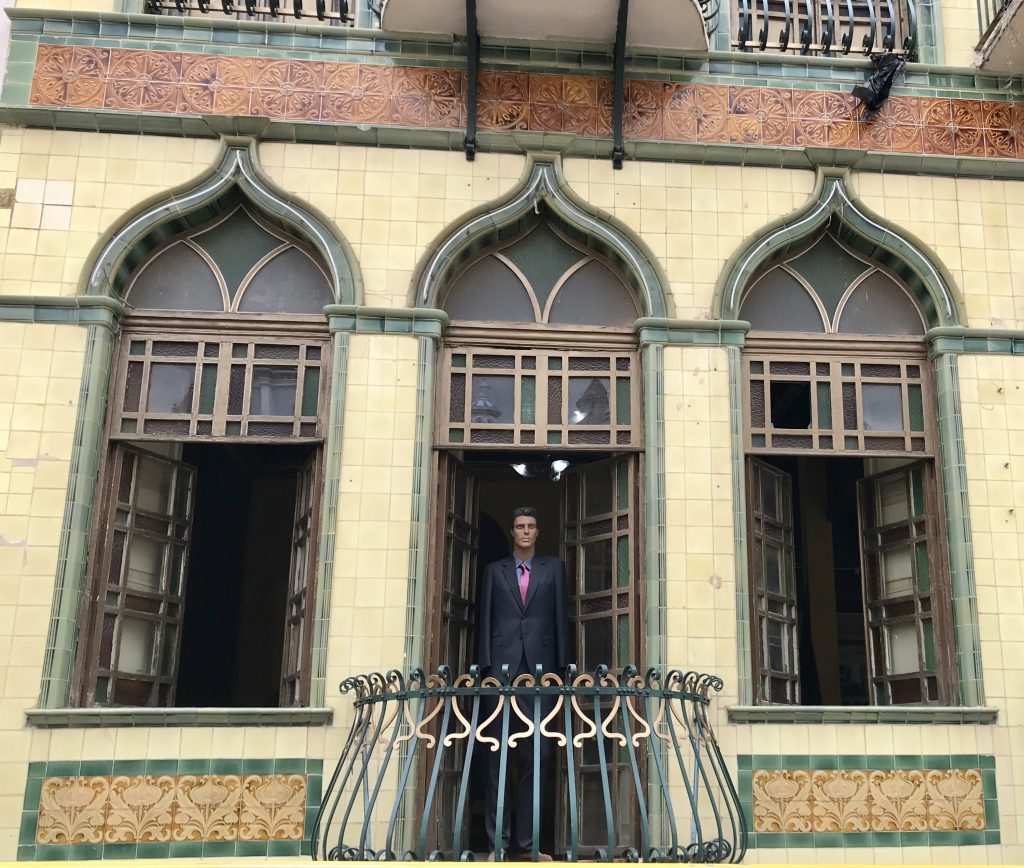 The peak of the tour was a 45 minute stop at the top of a very tall hill with the ancient Turi church on top. Views were spectacular! This is a tall peak of the Andes mountains, on the outskirts of town. From the Mirador (scenic overlook) one can see the entire city in one glimpse, surrounded by mountains. I stood there thinking about the Aztecs who originally lived here with their stone-built cities. After them came the Cañari people, and lastly the Spanish. (Will history record the massive influx of rat-race-escapees from the US and Canada in the early 21st century?) Way in the distance we identified our hilltop neighborhood in a slight gap between mountains. We bought some freshly made chocolate of pure cacao, and took photos of the vast landscape below us.

Most of the tourists seemed to be Ecuadorians, though there was one other family aboard with light skin and hair. I heard them speaking English and another European language I couldn’t identify. Some of the young Kichwa women enjoyed interacting with us (obvious) foreigners. They’d smile over at us at certain parts of the tour guide’s speech that referred to expats living in town, and laughed with us when the low wires almost knocked us over. Several of us got smacked in the head by a low hanging branch, and I got smacked by a flag overhanging the street, and we all laughed together. The majority of locals seem to welcome us and enjoy the foreigners who choose their land to live in for a few years or longer. 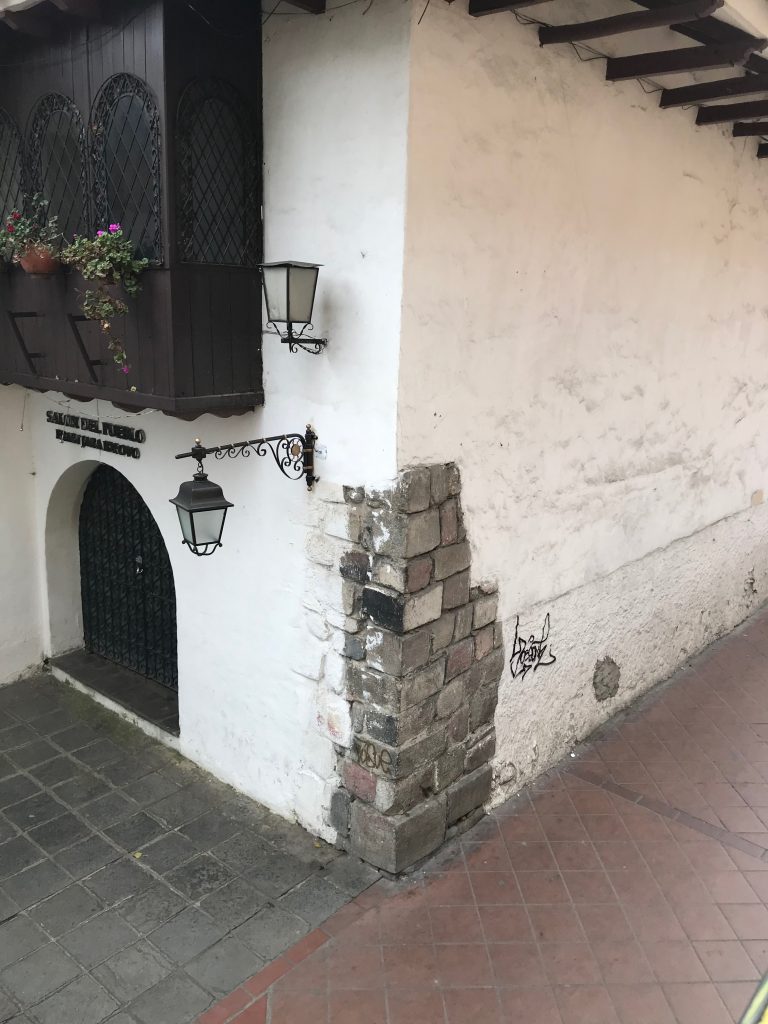 I was glad that the return trip followed many of the same roads back. I had time to examine the ornate architectural elements that we passed at close range from the top deck. I can’t get enough of admiring the craftsmanship that went into these ancient buildings in the old parts of town. In the oldest buildings, some of the siding had fallen away, revealing the stacks of adobe bricks made of clay mixed with straw. An interesting feature of some of the oldest buildings was that they would maintain the building’s exterior all except for the most prominent corner. That they’d leave unpainted, unrepaired, unplastered. All the layers of hundreds of years of history showed in that one corner of the building. Those corners were like tiny museums of architecture. The oldest building that I”m aware of seeing is a church built in the mid 1500’s. It’s still in use today, as a museum that holds church services on Sundays.

Seeing and learning about more of the area got me feeling less like a tourist and more like a part of the city’s history, another layer of people woven together, sharing the city for a time.