Ecuador is a relatively poor country where most people cannot afford to own and operate a car or truck.  Also, many of the towns and cities are very walkable.  As a result, public transportation is abundant here.  Buses and taxis are the most common mode of transportation, but there are also a lot of motorcycles and scooters on the road, which are cheaper to buy, own, and operate.

The major mode of transportation to get around Ecuador is buses.  The majority of the people living here cannot afford to own cars, and there are many who simply choose not to own one because it’s not necessary.  A bus ride from Cotacachi to Quito is currently about $2.50. One from Cotacachi to Otavalo is .35, and they run all of the time.  The buses are all diesel so they are noisy and polluting but they are a necessity in Ecuador.

The latest in transportation in Ecuador is the introduction of electric buses in Cuenca.   Cuenca is the first city in the country to operate these kinds of buses.  They will replace the noisier, dirtier diesel buses currently used. On the initial test run this year, both passengers and driver liked the ride.  This will go a long way toward reducing the pollution and noise levels in this beautiful city. 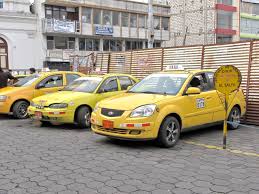 Taxis are the other major mode of transportation in Ecuador.  They are everywhere, and cheap, compared to North American countries. Some of the taxis are the usual yellow cabs, some are plain old cars.  I am told that it is better to use a yellow taxi unless you know the driver.  Many people, including the expats living here, have their favorite drivers.  As a tourist, using a personal driver to get around is a great alternative to renting a car in Ecuador.  Our driver speaks pretty good English, which is helpful if your Spanish speaking skills are limited.  He acts as driver and tour guide on the way.

They also have truck taxis here.  They are distinguishable by their white and green color.  These can be used to transport larger items from a store, like building materials, appliances, etc.  They are available with and without bed covers depending on what you want to transport.

Taxis are an important part of travel in Ecuador.

There are fewer people driving cars in Ecuador, but still plenty of cars on the road.  This may be because buying and owning a car in Ecuador is very expensive.  The cost of buying one is about 20% – 30% higher than in the US and even higher on used cars.  If you buy a used car here, you inherit any fines attached to it.  Bringing a car from the states is cost prohibitive.

The smaller towns have far fewer cars than the major cities.  While I have not been there, I hear Quito has serious traffic problems, partly dealt with by assigning days that you can drive your car into the city.  Cotacachi, where I am staying has very few cars, and there are no traffic issues.  The drivers of these cars are not big on patience sometimes and ignore the rules of the road at times.

Cars also take priority over pedestrians, so don’t cross the street without looking first.  They will sometimes swerve around you instead of stopping.  In the 3 weeks I have been here, I have felt little need for a car.  Occasionally it would be nice to just jump in a car and take a ride, but the savings by not owning one more than covers the cost of all the taxis and bus rides you can take.  Ecuador cities and towns are very walkable and a good way to keep in shape. 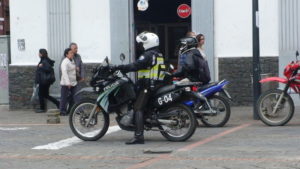 Motorcycles and scooters are very common in Ecuador.  They provide inexpensive transportation and are an easy way to get around the towns and cities.  Most of the motorcycles I’ve seen have been smaller 125cc models, which is a great size for getting around town.  Some of the motorcycles have 3-wheel carts attached for hauling things.  Many of the brands seem to be Chinese in make.  Here in Cotacachi, even the police use motorcycles to get around.

The bottom line is that owning a car in Ecuador is unnecessary for most people because the cities are walkable, and public transportation is cheap and abundant.  There are more than enough personal drivers to take you anywhere you want to go for a reasonable price.