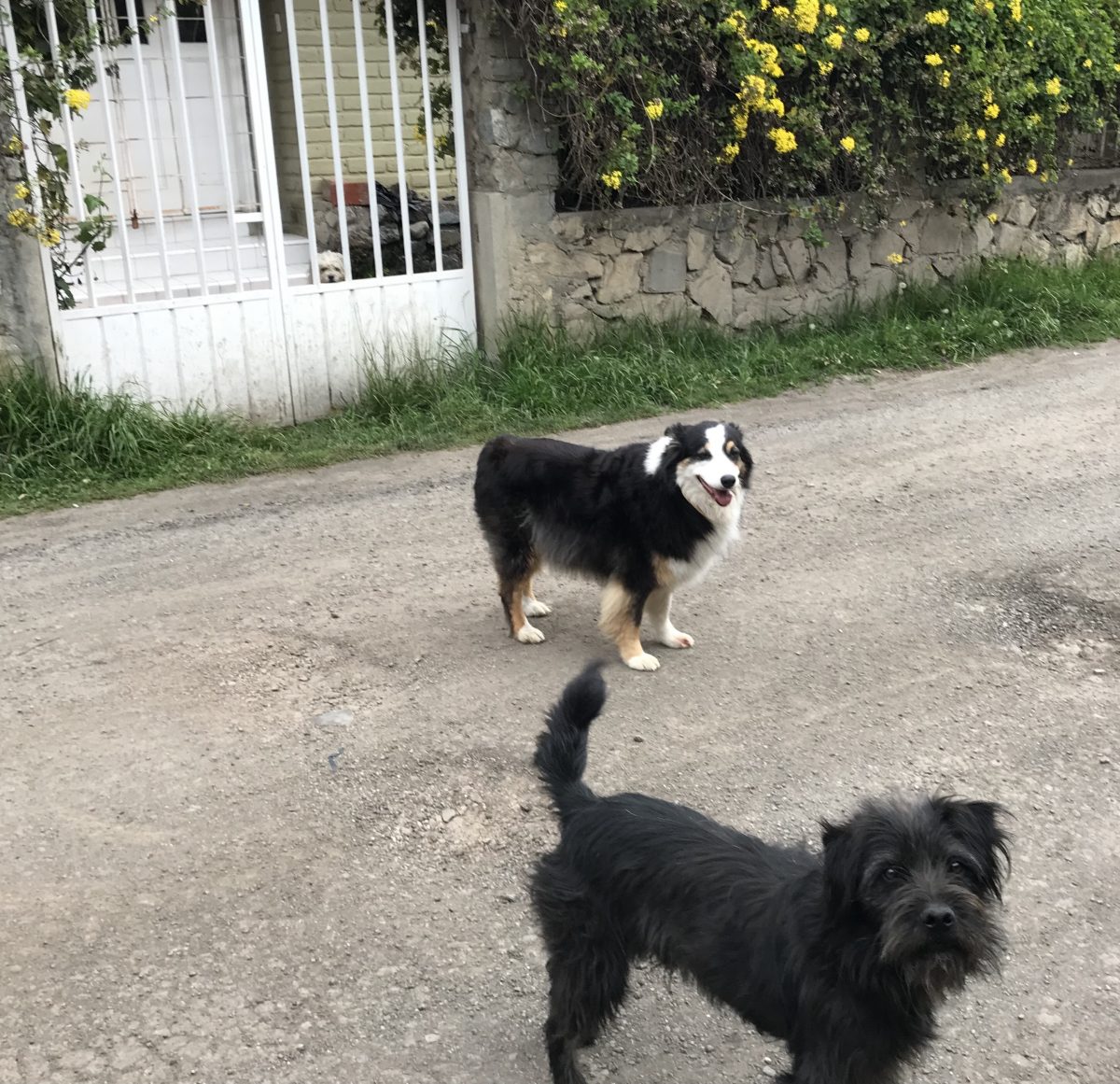 In our first two weeks here, we napped twice a day! The altitude (8500′ at our house) was hard on our bodies.  Then we went down to one nap per day, then every other day.  Now we don’t nap much unless we really exert ourselves.  Gary bought a great quality bike from a guy who was heading back to the US.  It’s a hybrid road-offroad bike, so he can take it anywhere. When he rides it way down the mountain along the river trail, and then back up the mountain to our house, its nap time. I’m impressed that his lungs are able to manage the altitude and the uphill exertion!  I still get winded when I walk up the steep terraced hillside from our veggie garden to the house. Progress: I can now walk from the bus stop up the unbelievably steep curving sidewalk through our hilltop neighborhood, often without resting.  I love seeing that improvement.

When we first arrived, our street had several tangle-haired street dogs who came running up growling when we walked past. Strangers in their territory! We were told to carry a long stick to swing towards them, and some small rocks to toss towards them, to discourage them. Sure enough, they were used to people actually hitting them with a stick or a rock, so our gentle efforts made them back up. After a week or so of them becoming accustomed to us, we changed tactics. We began tossing dog treats. That astonished them! It took only two days of this tactic, to convince the dogs that we were now residents rather than strangers — residents offering food.  The scariest honcho street dog switched teams, and began protecting us from the other street dogs! He and Star became buddies, who now run to greet one another in order to trot side by side around the neighborhood. Our new neighbors told us that two families take Lukas into their yards and houses for a meal and a brushing, whenever he wants a little pampering. When he’s had enough, he goes back to the street. With Star as his girlfriend, Lukas has been lobbying hard for us to be his third part-time home. In deference to Maya the cat, we have refused his invitations.

We took a 3-week Spanish immersion course at a Language School we found. It’s called CCNations Escuela des Idiomas.  (School of Languages).  That was an intense schedule of 3-hour classes 5 days per week. The delightful professors taught us the basics of conversational Spanish, and served snacks during the break. At the end of the third week, we were at different skill levels, so we switched to individual one-on-one classes twice a week. We each love our teachers! Ecuadorians are gentle, kind, considerate people with a great sense of humor.

One week, a teacher took us to a historic bread bakery (in constant production for over 200 years), an art gallery, and an organic foods tienda called Semilla (Seed). He helped us learn what to say and how to say it, and taught us what the process is for buying at a bakery and at a tienda. It was nice to have a translator at the gallery, so we could talk with the artist. 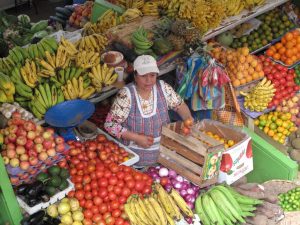 Another week, a different teacher took us to the big mercado nearby.  The mercados are buildings filled with indigenous ladies selling stacks of beautifully arranged fresh produce, picked that morning. There are usually eggs gathered that morning, as well as chickens (live and cooked) for sale. Sometimes the whole pigs are being grilled just outside the mercado, which is very hard for me to see. Our teacher spent half an hour giving us a vocabulary of food-related words, and showing us how to barter for the right price, or how to ask for something ripe enough to eat today. He showed us how locals call one another “vecino” or “veci” (neighbor). I notice people also frequently call one another “brother”, “sister”, “mother” or “mi amor” (my love). The kindness they exhibit towards one another warms my heart. We chose to buy from a woman with whom I had a long conversation about health-giving properties of various foods. Since then, we always prefer to buy from her. She comes just above our waists in height, so I can barely imagine how we appear to her. Like pale giraffes, I imagine.

Recently, Gary’s and my teacher both took the two of us to a museum of local history.

Museo de Remigio Crespo Toral, named for a local famous poet, lawyer and politician. That was fascinating! The museum is houses in a centuries-old house. There were beautiful paintings of some of the residents of the house. We both loved the marble busts, so perfectly carved and polished centuries ago. The handprinted wallpaper was the original wallpaper brought from France in the early 1800s.  One of the most horrifying exhibits for me was about the journey of a Spanish conquistador who “hired” indigenous servants to hand-carry on their backs the first car, a piano and many other large items over the snowy Andes Mountains to his house in Cuenca. He rode on horseback, of course. Most of the “servants” died on the journey, of course.  That piano was on exhibit in the museum. The building itself was worth the trip, filled with artistically carved wood balustrades and stairways and balconies and doors, plus lovely stained glass in a few windows.  We hope to go again and see the rest of the exhibits.

This gives you an idea of some of what we are up to, down here in the southern hemisphere!  Stay tuned for more stories, coming soon.