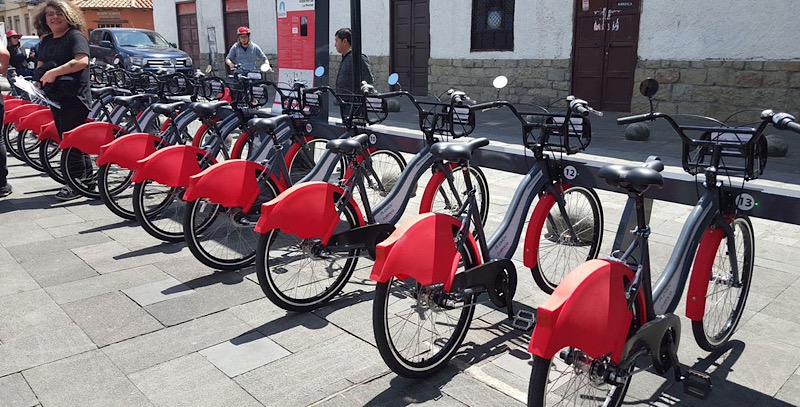 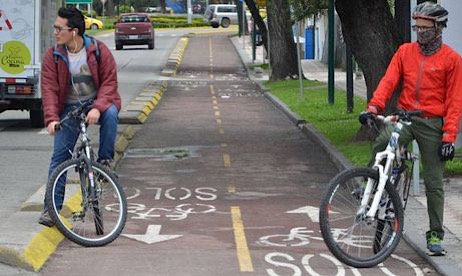 The good news is, there are a lot of good bike paths in Cuenca that allow you to ride off of the road.  They are well done, with markers and bumps to separate the bike trail from the street.  The bad new is, when you get to an intersection or traffic circle you have to cross, the turning drivers don’t yield to pedestrians and cyclists.  It can take awhile to get across these areas.  Crosswalks mean nothing to most drivers.  Sometimes it’s necessary to just put yourself out in front of a slower moving vehicle and force them to yield.  It’s risky but it works most of the time.

Some of the bike paths are laid out on wide sidewalks with areas marked for bicycles.  While this works, there is the hazard of cars pulling in and out of driveways and parking spaces, and people coming out of the doors of the stores along the sidewalk.  It means that you have to stay very alert to things popping out in front of you.  They also cross over cross streets where cars are turning , and again, drivers don’t yield.  You have to be a defensive rider at all times.  I have ridden these bike paths many times without incident but had a couple of close calls.  Just pay attention at all times. The one area where you can be at ease when you ride is on some of the wider, better riverside trails.  There’s no car traffic and people traffic is minimal.  Most of the trails are wide enough for pedestrians and bikes.  Riding along the Rio Tomabamba or Rio Yununcay is a serene experience and a great way to have a safe, relaxing ride.

Most of Cuenca is hilly, with plateaus of flatness.  Riding along the river is pretty easy because it’s mostly flat or has slight elevation raises.  A bike with a good gear selection makes a big difference if you have to ride uphill, as I do, to get to and from places.  Also, Cuenca is about 8000 to 8500 feet in altitude depending on what part of the city you are in.  This can be taxing on the lungs  and thigh muscles if you’re not used to the altitude.

There are many bike shops in Cuenca and many places that sell bikes, cheap ones and expensive ones.  You can probably find a bike that will work for you here, but it will cost you more than a comparable bike in North America, mostly because of the import tariffs on sporting goods.  But, that’s about to change as they are dropping the tariff amounts significantly.  Ecuador has some top rated cyclists that have made the country proud.  The leadership of Ecuador has taken note of this and is working to make it possible for more athletes to buy good equipment to compete in world events.

Bicipublica is a new bicycle loan program started by the city transportation office in 2019.  The have 240 bicycles in 16 locations around the central part of the city. This program allows people registered to pick up a bike and ride from one location to another in town.  The program is a great use for the city bike paths.

There are also locally guided bicycle tours of Cuenca that are very affordable.  https://www.toursbylocals.com/Cuenca-Bike-Tour

Overall, I’ve found that bicycling in Cuenca is safe as long as I stick mostly with the bike paths and stay alert at all times.  There are hazards no matter what city you ride in, but Cuenca has come a long way in making it safer to ride here